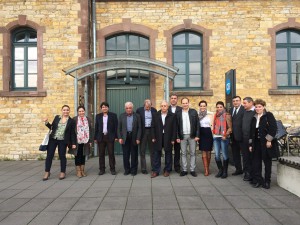 The 1st Coordination Meeting and Information Seminar on “National Qualifications Framework of Germany and the Implementation Issues” of the TEMPUS “ARMENQA” project were held respectively on the 30th and 31st of October, 2014 at Osnabrück University of Applied Sciences in Osnabrück, Germany. As it was a coordination meeting only the project’s European (Sweden, Denmark, Germany, Belgium and Romania) and Armenian partners/ (universities and social partners) were participating. There were 15 Participants from Partner Institutions.
The aim of the meeting was to introduce the progress and results of the project up to now, to introduce and coordinate the upcoming work on the project, to get familiar with the German Qualifications Frameworks, to provide a platform for discussions and exchange of ideas, etc.
The meeting started with a welcoming greetings by Mr. Volker Gehmlich/ University of Osnabrück, then followed by a greeting of Mr. Janerik Lundquist/Linkoping University/International Coordinator/. Then Mr. Armen Budaghyan /YSU/, Associate-Vice Rector and Director of QA Center, introduced the agenda for two days. Afterwards, Mrs. Kristina Tsaturyan /ASPU/, Head of International Cooperation, briefly introduced some organizational issues regarding the project. Till the afternoon, Mr. Volker Gehmlich made the general introduction into the German Qualifications Framework, its implications for German HE, allocation of qualifications in the framework, Quality Assurance of Qualifications and German Sectorial Qualifications Frameworks.
Later 1st and 2nd work package activities (schedule, progress made, working groups, challenges etc.) were introduced by the Armenian Coordinators. The ARMENQA project’s website and logo was presented to the participants as well.
On the second day of the meeting mainly organisational and contextual issues were discussed regarding the preparation for the upcoming trainings in Sweden (Formulation and writing of LO-based qualifications/level descriptors) and sector-specific trainings with their schedules in Yerevan in five sectors (Law, Physics, Education, Civil Engineering and Agriculture). Then Mr. Armen Budaghyan introduced key strategic goals and objectives of the Implementation Strategy of the National Qualifications Framework for Higher Education in Armenia during 2015-2020, which was actively discussed and commented by Armenian and European partners both on wording, preciseness and schedules.
The meeting was summed up by Mr. Janerik Lundquist, Mr. Volker Gehmlich and Mr. Armen Budaghyan. The partners partners thanked each other for the active and fruitful participation, especially German partners for the perfectly organized meeting and seminars.